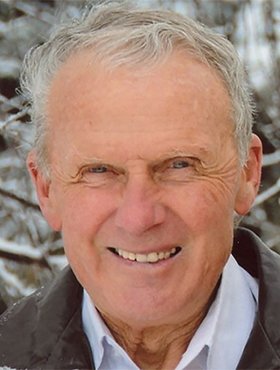 Grant Shuttleworth, beloved husband of Kathy Shuttleworth (nee Cosovan) of Balzac, AB, passed away on Saturday, March 21, 2020 at the age of 88 years.

Grant was born in Calgary, AB on October 22, 1931, and was raised on the family farm at Balzac, AB.  Grant attended Buttes School, and then completed his high school at Mount Royal.  After graduation, he took Agriculture Mechanics at SAIT. Grant spent his life farming and raising purebred Charolais cattle in the Balzac area. He enjoyed travelling; visiting many destinations around the world, sharing these experiences with family and friends. He also took pleasure in cheering on the Stampeders and Flames. He was very active in various volunteer organizations, including Balzac United Church, Samaritan's Purse, the Calgary Stampede, Nose Creek Historical Society, the Airdrie and District Museum Society, Alberta 4-H, and Medical Mercy Canada. In addition to his community involvement, he cherished time with family.

A private family service was held at Balzac United Church on Friday, March 27, 2020. Memorial service to be held at a later date. Condolences, memories and photos may be shared and viewed on Grant’s obituary at www.McInnisandHolloway.com. If friends so desire, in lieu of flowers, memorial tributes may be made directly to Balzac United Church - 10076 TWP 262, Balzac, AB T4B 2T3,  balzacunitedchurch@gmail.com, or to a charity of one’s choice.

The family would like to thank all the staff at the Colonel Belcher for their wonderful care they gave Grant during his stay there.

Services for Grant SHUTTLEWORTH
There are no events scheduled. You can still show your support by sending flowers directly to the family, or planting a memorial tree in memory of Grant SHUTTLEWORTH.
Visit the Tribute Store

Share Your Memory of
Grant
Upload Your Memory View All Memories
Be the first to upload a memory!
Share A Memory
Send Flowers