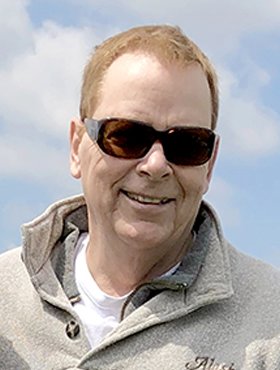 Michael Villiers, beloved husband of thirty-nine years to Evelyn Villiers of Calgary, AB, passed away on Friday, March 27, 2020 at the age of 66 years. Mike always stayed optimistic even throughout his illness. His enthusiasm and appreciation for life will be remembered by all.

Though Mike was born in Ontario, he was raised in Calgary and he was a proud Calgarian. Mike travelled all over the world. He was outgoing, personable and made friends wherever he went. Mike had a deep passion for Shotokan karate. He practiced for over thirty-five years and loved to share his knowledge and experience with everyone.

Most important to Mike was his family. He loved spending time with his family and especially his five grandchildren.

Besides his loving wife Evelyn, Mike is survived his daughter and son-in-law, Rachael and Craig Newcombe; his son and daughter-in-law, Kevin and Loralie Villiers; his grandchildren, Justice, Thaidan, Xavier, Brooklyn, and Owen; his sister Susan Messett; and his niece JaSan (Conrad). Mike was predeceased by his father Arthur Villiers, and mother and stepfather Eileen and Len Flynn.

A Family Gathering will be held at a later date. Condolences, memories and photos may be shared and viewed on Mike’s obituary at www.McInnisandHolloway.com.

Services for Michael VILLIERS
There are no events scheduled. You can still show your support by sending flowers directly to the family, or planting a memorial tree in memory of Michael VILLIERS.
Visit the Tribute Store

Share Your Memory of
Michael
Upload Your Memory View All Memories
Be the first to upload a memory!
Share A Memory
Send Flowers