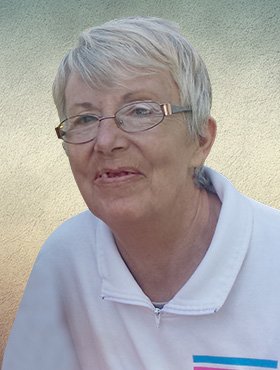 Josie was born in Sydney, NS, on June 19, 1947. Her grandmother gave her the nickname of “Cupie”. She moved to Calgary, AB, in 1978 when her first husband Charles was transferred with the military. Josie worked for Fish and Wildlife before she met and married Colin Holroyd. She then started in the overhead door buisness where she spent the remainder of her career. Josie enjoyed a strong cup of tea, long walks, history, watching movies, and playing with her grandson. She had a passion for ancient Egyptian culture. Josie’s most memorable vacation was when she went to visit Fort Louisburg. She talked about this often as it has links to her ancestry.

Josie is survived by her two sons and daughter-in-law, Micheal and Janie Drummond of Nanimo, BC, and Shawn Drummond of Montreal, QC; daughter and son-in-law, Tanya and Dan Barkaurskas of Calgary, AB; grandchildren, Sianna Drummond and Nathan Barkauskas. She is also survived by her three brothers, Keith (Eileen) Robicheau, Joe Robicheau, and David Robicheau. Josie was predeceased by her parents, Loretta and Leonard Robicheau.

Due to current situation in the world, a Memorial Service will be held at a later date. Condolences, memories and photos may be shared and viewed on Josie’s obituary at www.McInnisandHolloway.com.

We would like to thank all of the amazing staff and volunteers at Father Lacombe Care Center. What you do is truly amazing and really appreciated.

Share Your Memory of
Josephine
Upload Your Memory View All Memories
Be the first to upload a memory!
Share A Memory
Send Flowers