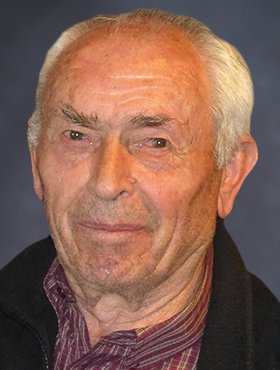 Antonio Esposito, born in Marigliano, Naples, Italy on July 13, 1935, died peacefully in his sleep on June 24, 2020 at the age of 84 years. Antonio (Tony) was the second oldest son of a farmer and at a young age lived through the loss of his mother, and WWII with its near famine conditions. These events shaped the man he became and gave him the instincts to adapt and survive. In 1966, aboard the Constitution, he took his opportunity to come to Canada where he met fellow Marigliano native and future wife Dolores, at a train station in Montreal. In Calgary they made their life together. For over 30 years, he worked with the Italian crews in concrete, making many of the sidewalks that still exist today. In his spare time, he used his knowledge of farming to grow beautiful vegetable gardens, right up until a few years ago. He loved his garden, spending time with his friends and family, playing cards, and having “coffee time”. He especially loved his grandchildren. He will be missed by his son Joseph (Joe), daughter Felicia, his daughter-in-law Marla and son-in-law Larry and most especially by his grandchildren, Lucas, Andrew, Emilia and Alexander. He is also survived by his brothers Giuseppe and Giovanni, sisters Vincenza and Felicetta in Italy.  He is predeceased by his wife, Dolores (Addoloratta), brother Raffaele and parents.

Funeral Services will be held at McINNIS & HOLLOWAY (Chapel of the Bells, 2720 Centre Street North, Calgary, AB), on Monday, July 6, 2020 at 10:00 a.m.  Condolences, memories and photos may be shared and viewed on Antonio’s obituary at www.McInnisandHolloway.com. If friends so desire, memorial tributes may be made directly to the Canadian Cancer Society, 200 – 325 Manning Rd. N.E., Calgary, AB T2E 2P5 Telephone: (403) 205-3966, email donorservices@cancer.ab.ca.

Share Your Memory of
Antonio
Upload Your Memory View All Memories
Be the first to upload a memory!
Share A Memory
Send Flowers