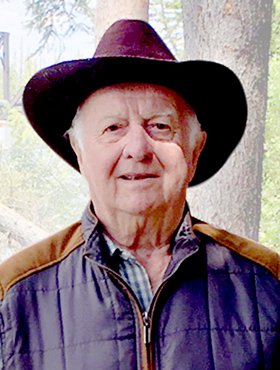 It is with a sense of deep loss that Brian’s family announces his sudden passing. Brian will be deeply missed by his loving wife of nearly sixty-one years, Jill (nee Torrington), his daughter Jennifer (Martin); sons, Jonathan (Debbie) and Adrian (Leilanie), and granddaughter Alexandra.

Spending his formative years in the Leicestershire district of England, Brian led a rich and wholesome life. Eventually settling on the fine skill of draftsman, he developed technical drawings for electric gas turbines for the English firm that later became General Electric. In following that career, he married the one and lasting love of his life, his beautiful wife Jill, with whom they raised their three children.

Always keen to follow new and exciting opportunities to advance the comfort of his family, he and the family immigrated to Canada (Calgary) in 1981 where he continued his draftsman career. From there, he found his true passion of working closely with people in sales. Brian continued to work in the final years of his life, complemented by his devoted service as an Elder in the Christ Moravian Church.

Happy to rely on his technical skills for enjoyment in repair, building, gardening, and almost anything that occupied his active mind, Brian derived his absolute greatest joy and energy from his family and friends. They provided an endless source of energy, laughter, and comfort for him and Jill. He was immensely proud of his three children and the career paths that they followed. The arrival of his granddaughter, Alexandra, brought him full circle, reminding him of his own childhood and memories of raising his own children, completing the arc of an extraordinary, joyous and fulfilling life.

Funeral Services will be held at McINNIS & HOLLOWAY (Fish Creek, 14441 Bannister Road SE, Calgary, AB) on Friday, July 3, 2020 at 10:00 a.m. Reception to follow in the Hospitality Centre at the Funeral Home. Condolences, memories and photos may be shared and viewed on Brian’s obituary at www.McInnisandHolloway.com. If friends so desire, memorial tributes may be made directly to a charity of the donor's choice.

Share Your Memory of
Brian
Upload Your Memory View All Memories
Be the first to upload a memory!