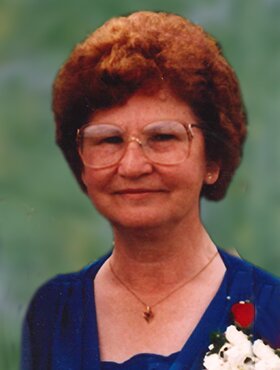 Lydia Wing (nee Zimmer), of Calgary, AB, beloved wife of the late Elmer Wing, passed away peacefully on Thursday, September 15, 2022, at the age of 94 years.

Lydia was born in Bashaw, AB, on January 17, 1928. She married Elmer in 1946. Lydia accomplished much throughout her life and was particularly proud of becoming a Mother, Grandmother, Great-Grandmother, and Great-Great-Grandmother. She enjoyed baking, crocheting, camping, shopping, and watching The Young and the Restless. The most memorable vacations were when she and Elmer would go camping at Keiver’s Lake, Bragg Creek, and Carsland. They would often have the grandchildren accompany them. Together they could often be found playing Rummikub, a jigsaw puzzle, or the card game “May I?”. She will be most remembered for her delicious baking especially her molasses cookies and homemade jelly rolls.

Special thanks to the staff at the Edgemont Rivera, the staff at Sunnyside West at Brentwood Care Center, and Dr. Nadoori for the wonderful care at the end of life.

A Graveside Service will be held at the Bashaw Cemetery (NW 28-41-21-W4, South on Highway 21) at a later date. Condolences, memories, and photos may be shared and viewed here.

Share Your Memory of
Lydia
Upload Your Memory View All Memories
Be the first to upload a memory!
Share A Memory
Send Flowers