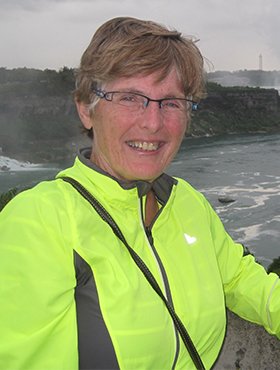 Bev Little beloved wife of Norm Little, passed away on Wednesday, February 12, 2020 at the age of 72 years.

Bev was born in Winnipeg, Manitoba on June 3, 1947. Bev grew up on numerous farms across Canada before settling in Calgary, Alberta, where she eventually met a charming, funny, Police Officer, Norm Little. Norm and Bev married in June of 1974.

Bev made a huge impact on the lives of numerous staff and families at Renfrew Educational Services where she worked as a dedicated Executive Assistant for 30 years.  Bev had a passion for sports and was an avid ball player, runner, and enjoyed biking, picnics and long walks with friends. She loved anything that brought family together.

Bev could often be found at the rodeo grounds with Norm, enjoying the company of friends and serving up her famous potato salad. She loved to drive, putting on thousands of miles for family road trips or taking anyone anywhere they needed to be, all while listening to George Straight. Bev will be remembered for her unconditional love and generosity.

Bev was predeceased by her parents Bill and Ethel Bell, and father-in-law George Little.

Bev’s family will be forever grateful for the care Bev received from the angels who work in the Aspen wing of the Airdrie Bethany Care Centre, and a special thank you to Haley Brietzke and husband Rob for their friendship and care.

A celebration of Bev’s life will be held in the upper level of the Ron Ebbesen Arena (200 East Lake Crescent NE, Airdrie) on Thursday, February, 20, 2020 at 1:30pm. Condolences, memories and photos may be shared and viewed on Bev’s full obituary at www.McInnisandHolloway.com. If friends so desire, memorial tributes may be made directly to the Bethany Care Foundation, #100, 2915 – 26th Avenue S.E., Calgary, AB T2B 2W6 Telephone: (403) 210-4600, email: bcf@bethanycare.com.

Share Your Memory of
Beverley
Upload Your Memory View All Memories
Be the first to upload a memory!
Share A Memory
Send Flowers