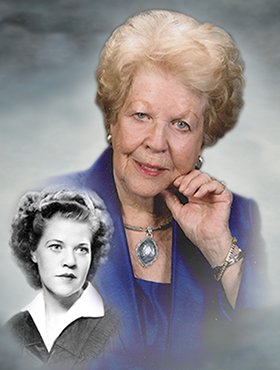 Katherine Luella Moir, beloved matriarch of the Moir family, passed away in her sleep on Tuesday, July 28, 2020 at the age of 97 years.
Luella after being raised on a farm in Alameda, SK, entered nursing training at the Brandon General Hospital and received her Registered Nurse designation in 1947. After which she maintained a long and lasting friendship with many of her classmates. While raising a family of six children, she worked in many nursing roles.  Luella was the Nursing Supervisor at the Villa (Aventa) a centre of excellence for women with addictions.  She also worked as the Director of Care at Southwood Nursing Home for many years. Retirement did not stop her from volunteering at many of Calgary’s social service agencies. She remained an active member of both St. Andrews and Southwood United Church.

She married Thomas Parkes Moir, in Brandon, MB in 1951 and they were blessed with six children that they raised in their Kingsland and Southwood homes. This is also where many of her good friendships started. Tom passed away at the age of 64 on July 27, 1982, and in later years Luella found her close high school friend Reginald Watt and they were able to enjoy many years travelling.

Luella was gracious, caring and compassionate to all and has left a legacy behind in the impact she had on the community through her nursing and volunteer work, and in passing along to her family a constant interest and curiosity in the world.  She will be greatly missed by everyone who knew her.

Service to be limited to family members only. Condolences, memories and photos may be shared and viewed on Luella’s obituary at www.McInnisandHolloway.com.

If friends so desire, in lieu of flowers memorial tributes may be made to a charity of your choice.

Share Your Memory of
Katherine
Upload Your Memory View All Memories
Be the first to upload a memory!
Share A Memory
Send Flowers