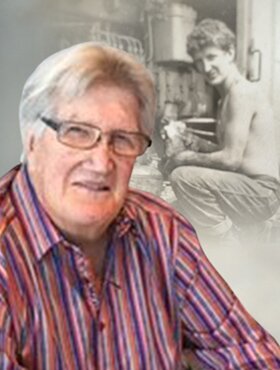 It is with profound sadness that we are announcing the death of our father Clifford Irving LaPrairie.

Born February 15, 1931 in Timmins, ON, to a large and loving Irish family. His parents were Adolphe (LaP) LaPrairie and Beatrice Kelly. He was the eighth child of nine; Paul, Rosemary, Jules, Richard, Leon, Carl, Jacqueline, and George. Our father fondly remembered his idyllic childhood growing up in Toronto. His youth was filled with mischief and adventure alongside his best friends George and Jacqueline. When he was too high spirited to sit still in the classroom as a child, the nuns at St Mike’s Primary School, would send him out to shadow the maintenance man to help build bike racks, paint stairs, and fix the boiler. This allowed him to learn various skills and made him a lifelong advocate for the trades and tradespeople. He also sponsored the first woman in Ontario to receive her autobody ticket. He has always been a champion for men and women to join the trades.

Our father would regale us with tales of lively parties and singalongs at 17 Montclair Avenue. The LaPrairie family get togethers were famous for music, laughter and welcoming everyone. From a very young age our dad was determined to pursue his dream of becoming a mechanic. While in technical college he excelled and graduated with the highest marks in his class. Our father was driven and a hard worker, succeeding at anything he put his mind to. While not a popular choice with his family, he persisted, and in his true fashion dad did what dad always wanted to do.

In 1954, he made the best decision of his life when he married our mother Colleen Clarke. This union produced their eight children, Clarke (Patricia), Roachelle (Kelly), Scott, (Andrea), Pierre (Wayne), Anastasia (Andre), Reagan (Vicky) Shannon (Marty) and Octavia (Patrick). His family consists of their eight children, thirty-two grandchildren, and twenty-seven (and counting) great-grandchildren. He was also a favourite uncle to sixty-five nieces and nephews. Dad’s family was his jewel in his crown of a lifetime of many amazing accomplishments.

In 1957 he heard and answered the call of adventure. Our dad, an original Maverick, headed up to Elliot Lake, in Northern Ontario to become one of the pioneers of the town. He wasn’t there very long before he convinced his brother-in-law, and partner in crime, Carl Flintoff, to join him in Elliot Lake. They were soon followed by our mother and her sister Jacquie Flintoff where they did their best to populate this newfound town.

Our dad was a small business owner and entrepreneur in Elliot Lake, he started out owning an autobody shop, then a gas station, a car dealership and was also a contractor to the uranium mines in the area. One of his most memorable endeavours was the Snack Bar that allowed for his children and their many cousins to have summer jobs to save for school and make lifelong memories. Our dad was always a visionary and never missed an opportunity to diversify his interests and incorporate family into his work life.

In the late 1970’s he purchased his first crane. From these humble beginnings, his son Scott and his son-in-law Wayne McBrearty, drove the crane in 1982 to Tumbler Ridge, BC and kept the family tradition of entrepreneurship alive. Quickly joined by other members of the family they grew the Canadian owned and operated business to over 500 hundred employees and have been in operation for 60-plus years.

In the late 1980’s, our father answered the call of adventure once again and moved to the Yukon for what was only supposed to be two weeks but extended into 30-plus years. While in the Yukon he was able to fulfill his childhood dream of being a farmer. It was on this ranch that he designed and constructed himself his dream home made of square timber logs with his signature orange roof which became a prominent visual feature when you drove down the Alaska Highway. It was on his ranch that he was able to fully use his gifts of ingenuity, artistry, and innovation to create a fully operational bison and hay ranch. His ranch became a pivotal part of many of his grandchildren’s childhood where they would be sent during the summer to be mentored and apprentice with a Master.

Our dad was always larger than life and a man who you could never tie down. It is no exaggeration when we say he was a Living Legend. Our family has so many fond memories, LaPrairie Iced Tea, family ski trips, flying in his Cessna plane, adventures on the paddlewheel houseboat he built, his love of Hank Williams, his long red underwear, which he wore year-round, the handmade wrought iron chandeliers he made for all his children, Ritchie Bros Auctions, photography, Toronto Maple Leafs, his love of babies, and most importantly being the funniest man that we knew.

Besides being a Living Legend, he was always encouraging of his children and grandchildren to follow their dreams. Our father was a man who was always sensitive to those less fortunate in life and would often iterate that he could not believe his own good fortune. After a long and very full life our father passed peacefully surrounded by his children on September 21, 2022, in Calgary, AB, from progressive frailty.

A Wake will be held at McInnis & Holloway (Park Memorial, 5008 Elbow Drive SW, Calgary, AB) on Tuesday, September 27, 2022, at 6:00 p.m. A Solemn High Mass will be celebrated by his grandson, Canon Christian LaPrairie Juneau, the Reverend Massimo Botta, FSSP, and the Reverend Ralph Oballo, FSSP, at St. Anthony’s Catholic Church (5340 – 4th Street SW, Calgary, AB) on Wednesday, September 28, 2022, at 11:00 a.m. You are welcome to join us for the internment. Otherwise join us at The Inn on Officers’ Garden (150 Dieppe Drive SW Calgary, AB) at 2:00 p.m. Family and friends who are unable to attend in person are invited to join Mr. LaPrairie’s service streamed live (see below) on the day of the service. For those who are unable to view live, a recording of the service will be posted. Condolences, memories, and photos can also be shared and viewed here.

“For it is giving that we receive” – St Francis of Assisi.

Thank you for joining us for the live streaming of this event
(The event start time on our video player has automatically adjusted to match your time zone)
Our technical team does everything possible to ensure the best quality of the live-stream service.
Unfortunately, there are times when the internet connection at the venue or where you are viewing from may cause interference and buffering.
We apologize if this is the case with today’s live stream, but we want to assure you that this service will be recorded and uploaded following the service.

Share Your Memory of
Clifford
Upload Your Memory View All Memories
Be the first to upload a memory!
Share A Memory